Once again impacted by the Covid-19 pandemic, PSSAC’s 2021 Annual Meeting was held virtually on April 23, from 1-3 pm. 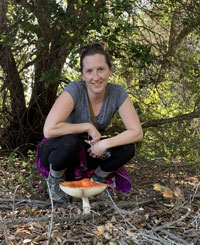 Soil health is key to maintaining topsoil, sustaining crop production, and mitigating the effects of climate change. Healthy soils in agriculture improve agronomic success as they host a diversity of beneficial organisms, grow vigorous crops, enhance resilience to drought and other stressors. Soil health practices are used in agriculture with varying success. We are evaluating the use of compost and commercial mycorrhizal inoculum on soil and plant nutrients in an organic annual cropping system. Two sampling times (pre-harvest and post-harvest) occurred in July and September 2020 around romaine lettuce growth. Soil samples were evaluated for nutrients, physical properties, spore counts, and microbial community. Lettuce tissue samples were evaluated for nutrients and percent mycorrhizal inoculation. Nutrient dynamics in both soil and plant tissue show trends, but few significant differences at this early in the study. Changes in physical properties were detected between July and September specifically in regard to aggregate stability. The metagenomic sequencing demonstrated a stark decrease in ITS1-1F and 18SV4 arbuscular mycorrhizal operational taxonomic units between the July and September sampling regardless of the treatment with the exception of an increase in ITS1-1F when both AMF and Compost was applied. Several mycorrhizal species were detected, but not the species reported commercial innoclum product. Sampling will continue this spring in celery for mycorrhizal percent inoculation and spore counts.

Bio: Meagan Hynes began her professional training with a Bachelor of Science in Botany from Oregon State University. For graduate school, she decided to “dig” deeper and explore the below ground environment. She obtained her Doctorate of Philosophy at University of California, Davis in Soils and Biogeochemistry in 2009. She has worked as a consulting soil scientist since 2010, and began her own company “Talus Soil Consulting” in 2014. During this time she also began teaching at California State University, Monterey Bay (CSUMB). She obtained her Certified Professional Soil Scientist certification in 2013. In 2020, Meagan became adjunct research faculty at CSUMB. Recently, teaching and research has focused primarily on soil in agriculture. To keep her sanity during the last year, Meagan has enjoyed masked hikes and mountain bike rides. 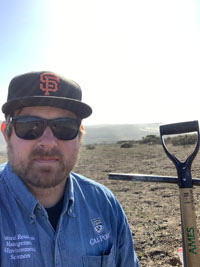 Presentation Title & Abstract: Expanding the Paradigm: The Influence of Climate and Lithology on Soil Phosphorus

The fate of phosphorus (P) during pedogenesis has been historically conceptualized (Walker-Syers model) with time as the controlling state factor. Herein, we demonstrate that both climate and lithology exert a strong and interacting influence on the fate of P by examining coupled bioclimatic and parent material effects on soil P fractions. Three transects were investigated spanning a 2150-m elevation gradient (MAT = 173o C/MAP = 3301400 mm) across three separate bedrock lithologies (lithosequence: granite, andesite and basalt) within the Sierra Nevada and southern Cascades of California. The elevation gradient entails four bioclimatic zones (bioclimosequence: blue oak, ponderosa pine, white fir and red fir). Soil P fractions were determined by sequential fractionation and interpreted in the context of associated soil characterization data. The bioclimatic sequences demonstrate a weathering gradient with maximum intensity at mid-elevation sites, and corresponding changes in Fe/Al-(hydr)oxide content and aluminosilicate crystallinity. Phosphorus content of parent material varied by an order of magnitude (mg P kg-1): andesite (>1500) > basalt (1000) > granite (131). Within a common climate, soil P fractions differed as a function of lithology. Labile inorganic P (Pi) was uniformly higher in soils derived from granite, despite granite parent material having significantly lower P content, a result of lower Fe/Al-(hydr)oxide content. With descending elevation and increased weathering intensity, HCl-Pi (primary mineral bound P – apatite) declined in basalt and andesite but remained unchanged in granite owing to its greater resistance to chemical weathering, resulting in lower Fe-(hydr)oxide content. As weathering intensity increased, occluded P increased in basalt, decreased in andesite and was unchanged in granite, contradicting the paradigm of progressive P occlusion with increased weathering. This incongruity for andesite results from a dominance of poorly crystalline materials (e.g., ferrihydrite, allophane/imogolite) at less weathered sites versus more crystalline minerals at lower elevations. This study highlights several caveats to the paradigm that time (i.e., degree of weathering) is the dominant pedogenic control of P fractionation. We identify the importance of interactions between lithology and climate in regulating the amount and types of weathering products that in turn control P fractionation and ecosystem availability of P.

Bio: Stewart Wilson is a long time member of PSSAC and an assistant professor of soil resources at California Polytechnic State University, San Luis Obispo. Dr. Wilson’s research is broadly focused on how soils form and are distributed across the landscape, and how soil formation and the spatial distribution of soils influences biogeochemical cycling and land management. Dr. Wilson conducts research in soil genesis and mineralogy, phosphorus biogeochemistry, predictive soil mapping and soil health. Dr. Wilson holds a B.S. in wildland soils from Humboldt State and masters and Ph.D. degrees in soils and biogeochemistry from UC Davis, as well as a masters degree in geography (GIS and modeling). Dr. Wilson teaches courses in introductory soil science, digital soil mapping and soil genesis and morphology. 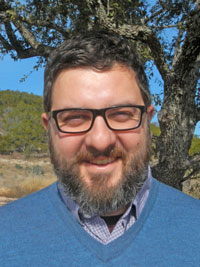 Presentation Title: Development and Application of the Pedogenic and Environmental DataSet (PEDS)

Bio: Daniel moved to Riverside, California from Lawrence, Kansas where he was a faculty in the Department of Geography and Atmospheric Science at the University of Kansas from 2008 to 2018. Before joining the faculty in Kansas, Daniel earned a B.A. in Biology from Texas A&M University in 1999, a M.S. in Soil Science from Texas Tech University in 2003, and a Ph.D. in Soil and Water Sciences from the University of California—Riverside in 2008. After 10 years in Kansas, he and his family moved back to UC Riverside to take an Associate Professor position in Pedology in the Department of Environmental Sciences.

Daniel’s work focuses on the development of techniques to quantify soil morphological properties through the application of 3-D laser scanning, rapid prototyping, photogrammetry, laser diffraction, reflectance spectroscopy, water retention, and the use of advanced multivariate methods. The application of these techniques has led to a new understanding for how exogenous and endogenous properties affect soil morphology and the rate at which morphological properties, such as soil structure, develops.