HISTORY AND DESCRIPTION OF SAN JOAQUIN: THE CALIFORNIA STATE SOIL

How the San Joaquin Soil Became the California State Soil

The Bill that designated the San Joaquin Soil as the official State Soil of California (SB-389) began its journey through legislative channels early in 1997.

The energy that finally propelled this long-proposed PSSAC project — the San Joaquin Soil being formally designated the “Official State Soil” — was that of Alex Lehman, who saw an opportunity to provide his middle school students with a meaningful endeavor which allowed an integrated curriculum approach.  Mr. Lehman solicited the assistance of a State Senator, the Honorable Dick Monteith, as well as PSSAC members Kerry Arroues, Gordon Huntington, Terry Cook and Tom Caudill.The concept to designate the San Joaquin Soil as the official soil of California began a number of years ago when Gordon Huntington, Ph.D., and several other PSSAC members suggested that designating an official State Soil would be a worthwhile goal of the association.  Despite careful research and preparation of appropriate documentation, the proposal did not move forward due to the lack of a legislator interested in seeing the project through the maze of committees and hearings necessary to enact such legislation. Mr. Lehman and his students approached Senator Monteith with PSSAC’s already researched “History of the San Joaquin Soil,”  “The Origin and Formation of the San Joaquin Soil,” and appropriate maps and soil description.  The students had also done their own research on other states already having an official state soil.   Senator Monteith was impressed and agreed to assist with the class’s project.

SB 389’s journey began on February 14, 1997.  It fell victim early on to some political skirmishing in the Senate.  It took up momentum once again via amendment in the Senate on 3/20/97 and the Assembly on 7/21/97.  From there it went to the Governor’s desk and was signed into California Government Code on 8/20/97.

History of Recognition and Development of the San Joaquin Soil

The history of recognition and the development of the San Joaquin soil dates from the turn of the 20th century.  Field operations of the United States Soil Survey, now known as the National Cooperative Soil Survey, began in 1899.  The San Joaquin soil was initially documented and officially established in 1900 as one of the first four soil series recognized in California by the survey (1).  All were considered to have agricultural importance.  Since then, three of these series have either been dropped from the official listings or have been combined with other soil series recognized at a later date.  Thus, the San Joaquin soil is the oldest, continuously recognized soil series within the state.  (More than 1,500 soil series are currently recognized in California.)  Nearly one-half million acres of this soil have now been identified and mapped in many counties in California.  With proper management, this soil has produced many millions of dollars of agricultural wealth for the state’s economy. 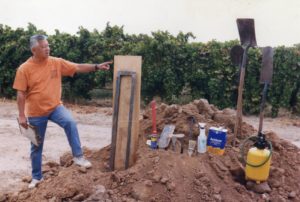 Knowledge of the San Joaquin soil’s properties and characteristics has become increasingly important in suburban and urban development. As the science of soil has advanced during this century, the concept of the San Joaquin soil has evolved, but has retained, as distinctive characteristics, its reddish color and its strongly cemented subsoil hardpan that limits root and water penetration.  Aside from the texture and structure of the surface soil, the early descriptions of the San Joaquin soil paid little attention to the physical character of the subsoil above the hardpan.  The hardpan was expected to be encountered within a depth of 6 feet.   The modern concept recognizes mainly a sandy loam surface soil overlying a finer textured subsoil that has a significant clay increase at its upper boundary or within some part of the subsoil.  The subsoil rests abruptly on a mainly silica-cemented hardpan at depths ranging from 20 to 40 inches.  With these features, plus defined ranges of other surface and subsoil properties such as color, texture, structure, consistence, pH, organic matter content, and inherent temperature and moisture characteristics, soil taxonomy now places the San Joaquin series in a fine, mixed, thermic family of Abruptic Durixeralfs.The San Joaquin soil was first recognized in the survey of the Fresno Area in 1900 (2).

At that time it was mapped as San Joaquin sandy loam on the “Red Formation” and characterized as being underlain by a “red sandstone hardpan.”  The soil was described as having a hog wallow (mound and swale) relief.  The depth to hardpan ranged from 1 foot to 6 feet.  The cementing agent for the hard pan was thought to be ferric hydrate with some lime carbonates and probably silica.  About 74,500 acres were mapped.The San Joaquin soil was next mapped in the Modesto-Turlock Area in 1909 (3) and was described as having a “brick red” surface layer that was underlain by a “ferruginous hardpan” at depths of 15 to 60 inches.  A red clay loam layer above the hardpan was recognized.  About 90,000 acres were mapped.In 1911, the San Joaquin soil was mapped in the Madera Area (4).  The concept of the soil did not change in this survey.  It was noted that the soil became saturated during the rainy season and became boggy and impassable except for well traveled roads.   About 138,000 acres were mapped.The San Joaquin soil was again mapped in the 1914 update of the Fresno Area (5).

The concept of the soil did not change significantly from that of the original survey in 1900, but sandy loam and clay loam types were recognized.  In addition, an increase in clay content of the subsoil above the hardpan was described in some places.   Where the hardpan was less than 30 inches deep, it was noted that it was necessary to fracture the hardpan by blasting to grow fruit trees.  There were about 127,000 acres mapped.In the 1915 Reconnaissance Soil Survey of the Sacramento Valley, California by L.C. Holmes, et al., heavier (finer) textures, either clay loams or clays, were described as normally intervening between the surface soil and the hardpan in the San Joaquin soil   San Joaquin soils mapped in the Reconnaissance Soil Surveys of the San Joaquin Valley and Southern California in 1915 to 1919 were similarly described.  San Joaquin soil identified in Southern California at that time have subsequently been correlated with other similar, but pedologically different soils.

During the 1920’s and 1930’s nine new soil surveys remapped, in greater detail, much of the area covered earlier by the Reconnaissance Soil Surveys of the San Joaquin and Sacramento Valleys.  For the most part, but not entirely, these surveys confined their recognition of San Joaquin soils to those areas of reddish hardpan soils having a clayey subsoil resting on the hardpan.  For a period of time, a very similar soil was recognized as the Rocklin series which differed from the San Joaquin series only in having thick, consolidated sediments beneath its hardpan, opposed to looser sediments beneath the San Joaquin hardpan.  This was considered to be of practical importance in modifying these soils for deep rooted crops (6).

By the late 1930’s and early 1940’s, this concept was dropped and the Rocklin soil redefined as a reddish hardpan soil having a distinct subsoil above its hardpan, but lacking a clay pan.  The character of the materials beneath the hardpans of either soil was no longer a differentiating feature since consistent determination in mapping was not feasible.The Soil Manual for the Eleventh Farm Credit District, USDA, dated 09/01/1941, described the following concept of the San Joaquin soil:  “As mapped in the past (San Joaquin soil) probably included several series.  As presently defined (this soil) occupies old terraces, fans, and valley plains of granitic origin, mainly on the east side of the San Joaquin and Sacramento Valleys.  Topography – sloping to undulating with ‘hog wallow’ microrelief.  Reddish brown topsoil over heavier (finer textured) subsoil containing an iron-cemented hardpan.  Redder in the surface and denser hardpan than associated Madera soil.  Used mostly for pasture and for dry-farmed grain.  Some fruit and other crops grown with fair success where irrigated.”

Further description of a San Joaquin soil profile was given in the Soil Manual as follows:  “The surface soil reported as a reddish brown, gritty sandy loam about 14 inches thick.  The subsoil reported as a sticky and very plastic, brownish red sandy clay loam about 10 inches thick resting abruptly on a red or brownish red, indurated hardpan.The oldest official description of the San Joaquin Valley series, filed with the Soil Conservation Service, was dated January 1941, and revised August 1952.  The concept was similar to that used by the Eleventh Farm Credit District except that the subsoil was described as a sandy clay with an abrupt upper and lower boundary.  This was the first official description that approached the modern concept of the San Joaquin series.   Subsequent field and laboratory studies have led to further revisions and to the present concept given in the 1996 series description.In 1983, the type location for the San Joaquin soil was relocated to a site north of Lodi, California, in San Joaquin county.  At that time, a monolith (a preserved 5 foot profile section) of the San Joaquin soil was prepared for this site and sent to the Netherlands World Soil Museum in Wageningen, Holland.  Previously, the San Joaquin soil had been selected by the Soil Conservation Service as one of California’s Benchmark Soils.  “Benchmark Soils” is a nationwide listing of soil series considered representative of soils in Major Land Resource Areas (MLRA) in the United States.Modern soil survey maps now show the distribution of San Joaquin Soil of California in Fresno, Madera, Mariposa, Merced, Placer, Sacramento, San Joaquin, Stanislaus, Sutter, Tulare, and Yuba Counties.  They are also located in Butte County, by an older soil survey.

The San Joaquin Series consists of moderately deep to duripan, well and moderately well drained soils that formed in alluvium derived from mixed but dominantly granitic rock sources. They are on undulating low terraces with slopes of 0 to 9 percent. The mean annual precipitation is about 15 inches and the mean annual temperature is about 61 degrees F.

TYPICAL PEDON: San Joaquin loam – on east facing complex slope of 1 percent in a vineyard at elevation of 40 feet. (Colors are for dry soil unless otherwise stated. When described on May 3, 1983, the soil was moist throughout).

RANGE IN CHARACTERISTICS: Depth to the duripan ranges from 20 to 40 inches. The mean annual soil temperature varies from 60 degrees to 64 degrees F and the soil temperature is not below 47 degrees F at any time. The soil, at depths of about 7 to 24 inches or directly above the duripan, is dry in all parts the rest of the year. Clay increases by more than 15 percent absolute.

There is an abrupt boundary at or within the upper part of the argillic horizon with an absolute clay increase of at least 15 percent.

COMPETING SERIES: These are the Yuvas and Redding series. Redding soils have base saturation of 35 to 75 percent in the A and Bt horizon and are gravelly or cobbly in the control section. Yuvas soils have a paralithic contact at 21 to 40 inches.

GEOGRAPHIC SETTING: San Joaquin soils are on hummocky, nearly level to undulating terraces at elevations of about 20 to 500 feet. Some areas have been leveled. Slopes range from 0 to 9 percent. They formed in alluvium from mixed but mainly granitic rock sources. The climate is dry with hot dry summers and cool moist and foggy winters. Mean annual precipitation varies from 10 to 22 inches. Average January temperature is 45 degrees F; average July temperature is 80 degrees F; mean annual temperature is 60 to 63 degrees F. Frost-free period is 250 to 300 days.

USE AND VEGETATION: Cropland and livestock grazing; crops are small grains, irrigated pasture and rice; vineyards, fruit and nut crops.

DISTRIBUTION AND EXTENT: Eastern side of the Sacramento and San Joaquin Valleys. The soils are extensive in MLRA-17.

REMARKS: This soils series is bordering on the Typic Durixeralf subgroup. The type location of this series has been moved to better reflect the central concept as historically mapped. (Textures from lab data reflect slightly different values than field estimates. NSSL S83VCA-077-042.)

Diagnostic horizons and features recognized in this pedon are: